Legendary, vibrant, and graceful, koi fish is one of the most recognized fishes in the world. Many legends and myths have ascribed unique koi fish meaning to this popular fish species. A beloved resident of most modern landscaping, you can often spot these beautiful living jewels inhabiting garden ponds, artificial lakes, or commercial aquariums.

Koi fish symbols and emblems are also becoming popular in houses as they are believed to be signs of good luck and positivity, and koi fish are celebrated for their resilient and courageous spirit. Let’s take a look at some popular koi fish meanings.

What Is a Koi Fish?

A koi fish is a beautiful, colorful fish often found in aquariums and ornamental ponds. All they require is food and filtered water. Adorned with beautiful colors like gold, orange, yellow and red, they are often referred to as “swimming flowers” and “living jewels” for their stunning beauty.

One of the primary reasons for koi fish’s immense popularity is their beautiful rainbow colors and pigments. From shimmering gold to intense amber to deep red, they come in various colors and shades. All thanks to an ancient genetic mutation. Legends and myths have attributed several meanings to koi fish colors, patterns, and markings. Let’s explore some of the most interesting ones.

Black koi fish come in two variants — one with an all-black body and another with black spots on a white body. The all-black variant called Karasu is a symbol of masculinity, strength, fatherhood, and perseverance.

If the fish has a white body with red marks and spots, it signifies career success. It’s also called Kohaku. If the white and red patterned fish has a red coloring around its mouth, like lipstick, it represents love and long-lasting relationships. It’s referred to as Kuchibeni or “lipstick fish.”

Bekko or the koi fish with a yellow body and black markings symbolizes true love. Bekko means “tortoiseshell” in Japanese.

Gold koi fish or Yamabuki symbolizes riches, wealth, gold, and prosperity. It says wealth is on the way, and you need to use it wisely.

Spiritually, the koi fish symbolizes peace, rejuvenation, and opportunities. These gorgeous colored fish have several spiritual and symbolic meanings associated with them.

Koi fish are known for their courage and fearlessness. Even in ornamental ponds, they need to be wary of predatory birds and animals. And regardless of the situations and challenges, koi fish face all dangers head-on, tackling obstacles and difficulties with a brave spirit.

In Asian cultures, koi fish symbolizes luck, good fortune, and positive circumstances. Koi fish are believed to bring good luck and prosperity to the lives of people who touch them. However, it’s not necessary to cultivate them. Even koi symbols and emblems are said to bring positive energies into your life.

Renowned for their resilient spirits, koi fish are capable of climbing waterfalls and swimming against rushing streams. These tenacious species are determined fighters who can adapt and thrive in any freshwater environment. All these qualities have made them symbols of grit and persistence.

Koi fish’s radiant colors and elegant bodies symbolize richness and opulence. These iconic fish are often associated with financial success and progress. It is one of the reasons why they are so expensive, adorning the gardens and ponds of wealthy state officials and emperors.

Borne of a meticulous and extensive breeding process, koi fish are unique and unconventional, and no two koi fish appear the same. Nonconformist by nature, koi fish are known not just for their fighting spirit but also for their willingness to stand out. They also embody creative self-expression and individuality. 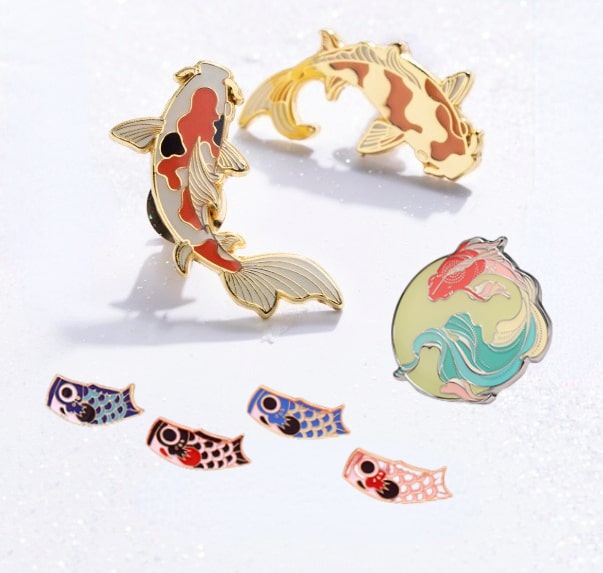 Koi have a luxurious appearance, they are adaptable and are used to dancing against the current. Koi is said to be a symbol of courage, a reminder that your dreams can come true if you persevere through difficult times. It can bring good fortune and good luck, so it is the most suitable gift. At this time it’s important to choose a color that symbolizes the message you want to convey.

If you are a small business owner, choose meaningful gifts for employees, or partners, A custom gold or silver koi pin is a good choice, You can also add the company’s brand name and logo pattern, This pin symbolizes wealth and good luck is beautiful and stylish. It also helps to enhance the corporate image.

If you are a sports coach, you can’t miss the koi pin symbolizing perseverance. Add the team’s name and slogan to the custom pins, and choose a black koi pattern that symbolizes strength and determination. Female athletes will be more suitable for the red koi representing strength, nice gifts, and beautiful meanings making the players more courageous on the sports field.

Have you thought about the message you want to convey? Check out the color meanings above. Come to gs-jj.com, you can also have more gift options, such as commemorative coins, patches, and even medals. As long as it is associated with koi, good luck and prosperity will arise in the person who receives the gift.

Legends And Myths of Koi Fish

These ornamental fish are rich in history and culture and have many tales and stories associated with them.

The Chinese and Japanese cultures admire and respect koi fish for its strength, determination, and perseverance. Both these cultures have several fascinating legends and myths about this fish.

A famous and fantastic legend associated with koi fish in Chinese culture is the Dragon’s Gate Waterfall legend.

Long ago, a large shoal of golden koi fish began swimming upstream in China’s Yellow River. Valiantly pushing against the gushing water’s current and flow, they plunged on with strength, perseverance, and determination. Their shimmering scales glittered and sparkled in the sun, and the Yellow River shone like a river of gold.

They soon arrived at a huge waterfall named “Dragon’s Gate” waterfall in Hunan that was too huge a barrier to cross. Unable to swim further, most koi fish gave up and let the current take them back to safe waters. However, some persisted, jumping and climbing up the waterfall, fighting against the rushing tide to complete their journey.

The evil spirits who prowled the area mocked and laughed at their attempts. Cheering and jeering every time they failed, finding amusement at the koi fish’s ordeal.

But the fishes continued for more than a hundred years, getting stronger and stronger with each attempt. And one day, one of the golden fish swam deep down to the depths. Gathering all the strength and speed, it burst out of the water and swam up the waterfall.

Battered and beaten, it swam on, disregarding the water’s rush, ignoring the evil spirits’ howls and jeers, until one final thrust of its fin landed it on top of the waterfall. The demons were silenced, and the gods were immensely pleased by the koi’s strength and dedication.

As a reward for its success, the gods changed the koi into a great golden dragon, the ultimate symbol of strength and power in Chinese culture. The waterfall was thus named Dragon’s Gate because of this story.

2. The City of Prosperity

King Shoko of Ro once gifted an unusual carp to the Chinese philosopher Confucius’ son. Confucius’s son placed the fish in his main hall, and soon the fish became a popular subject of many sculptures and artworks. Soon after, the city witnessed immense progress, wealth, and opulence. And thus, koi fish became a symbol of prosperity and inspiration.

As koi fish were often found swimming in pairs, they naturally became a symbol of love, affection, and matrimony.

The famous Taoist symbol, yin–yang, is known globally for the black and white teardrop-like shapes swirling around each other. While the figure signifies balance, harmony, and connection, it has slowly evolved when several artists replaced the teardrop with koi fish. Thus, the now-ubiquitous koi yin-yang design was born, which is now a good luck symbol for happy relationships and marriage.

In Japan, the samurai warriors are the ultimate symbol of strength, bravery, and dedication. As the koi fish in the Chinese legend jumped up the waterfall battling all hurdles and obstacles, they were likened to the samurais.

Moreover, when the koi fish is caught and taken out of the water, it doesn’t struggle and wriggle. It stays still and poised. Even when the fisherman’s knife comes down, it stays motionless, fearlessly accepting its fate just like the samurai.

Besides being a symbol of strength and bravery, in Japan, the koi is also a symbol of friendship and love. Koi fish are often found either swimming in pairs or huge shoals, always having each other’s back.

Koi fish is also a symbol of masculinity in Japan. At the Japanese Boy’s Day Festival every year, huge, colorful flags and streamers of koi fish can be seen swaying in the breeze. These flags, known as “Koinobori,” are flown hoping that the boys at the festival will grow up to emulate the koi fish’s qualities and strength.

Here are also some beliefs and interpretations regarding the koi fish swimming direction when it comes to tattoos.

#1. You are currently going through obstacles in your life and fighting against all odds but won’t give up.

#2. You’ve overcome a big hurdle. Armed with your newfound strength and endurance, you are now prepared to face any strenuous situation ahead.

#1. You are not in a position to move against the obstacles stacked your way.

#2. You’ve achieved your goals by overcoming all the obstacles and are now in a place of contentment.

Let’s take a look at different koi fish meanings when it comes to tattoo colors.

A black koi fish tattoo signifies strength. If you’ve successfully battled an obstacle and come out victorious in life, this can be a great tattoo to flaunt. Your obstacle could be an abusive relationship, drug addiction, depression, or any other challenging situation.

A deep red koi fish tattoo stands for intense love and passion, while a slightly pink shade symbolizes a daughter’s love. It can also signify power and bravery, colors commonly associated with the color red.

As with any blue symbol, a blue koi fish stands for peace and tranquility. It also stands for masculinity and is sometimes associated with reproduction.

A golden koi fish is often depicted through a mixture of yellow and orange colors. As gold koi fish stands for wealth and fortune, sporting a yellow koi fish tattoo is akin to ushering wealth into your life. 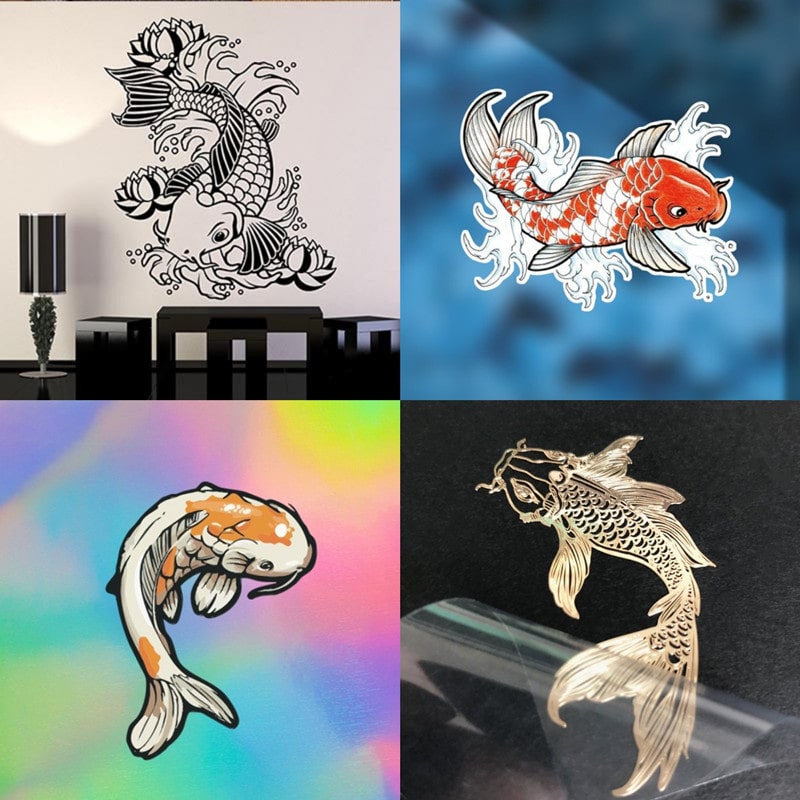 Having a koi is equal to having good luck, which is something to be proud of. As an aquarium owner, coffee shop, or tattoo parlor, You can use the koi pattern to show everyone your unique artistic style. Design the most satisfying pattern for your shop walls with custom die-cut stickers, and you can put stickers on the walls of your shops, cars, laptops, mirrors, desktops, or anywhere. Koi stickers can even be turned into products as giveaways to customers. Get started, Good luck finding your perfect koi!

Koi fish meaning throughout the world has always been of positivity and optimism. From strength and bravery to love and passion, Koi fish tattoos symbolize a plethora of meanings. So, if you’ve been thinking of sporting one of these on your body, you can’t really go wrong.

Avid reader by day and a writer by night. Maryann has 10+ years of experience in Digital marketing with stints in media buying, advertising, and public relations. If she's not reading or writing, you’ll find her spending time with Cookie, her beloved Golden Retriever.
PrevPrevious ArticleAre Fractional Shares a Good Investment: Facts and Myths
Next ArticleHow Do Pineapples Grow? Everything You Need To KnowNext

What Is Sustainable Forestry?

The most important advantages and disadvantages of group music classes

Industries that benefit from Die casting